This is another piece inspired by something at the last gathering.
We had a discussion on faeries/the fae/little folk.
Now, I don't know what they are, but I suspect that they're not nice cutesy flower fairies.
I imagine they're more like the Sídhe/Sìth of Gaelic mythology.

One of the regular features of the old tales is mysterious lights in the forest,
accompanied by wondrous music,
and that's what I've tried to capture in this canvas.
I'm not sure if it's complete yet, I may add a little more detail.

And now I'll let you into a secret.
The real thing doesn't look like the image above,

it looks like this.
I hadn't noticed when I was taking the pictures that a faint beam of sunlight was shining across it. It only became apparent when I loaded the images onto the PC.
Or maybe it was the little folk....... 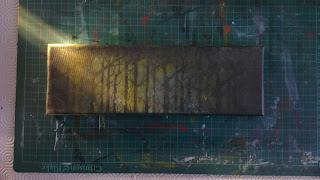