Now that the seasonal mayhem has died down a bit, it's time to show of some goodies that I've received recently.

The first set of offerings come from the talented Gwen at Foxglove Hill. We discovered each other's work during AEDM, which is part of Creative Every Day. We agreed to create something and swap items, and I think I got the better side of the deal. Apart from a fantastically textured canvas, there was also a Midwinter card, a small handmade bag of goodies, and even the original working ideas stitched together. It really was a fantastic package to receive, and the canvas is now adorning my wall. Thank you Gwen. 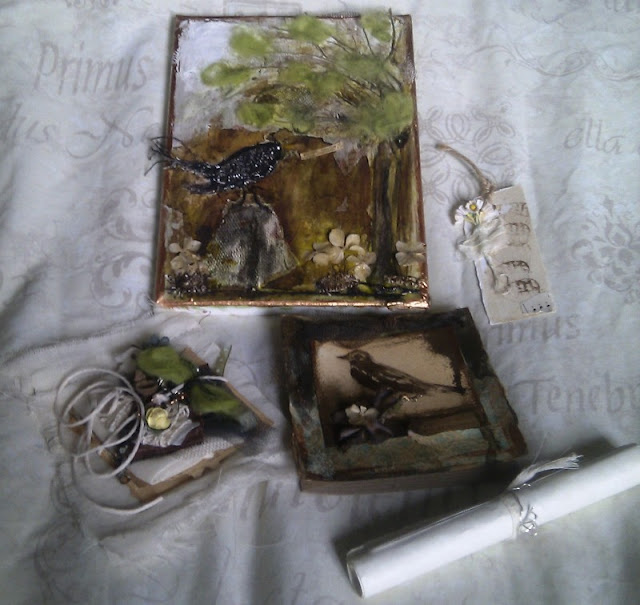 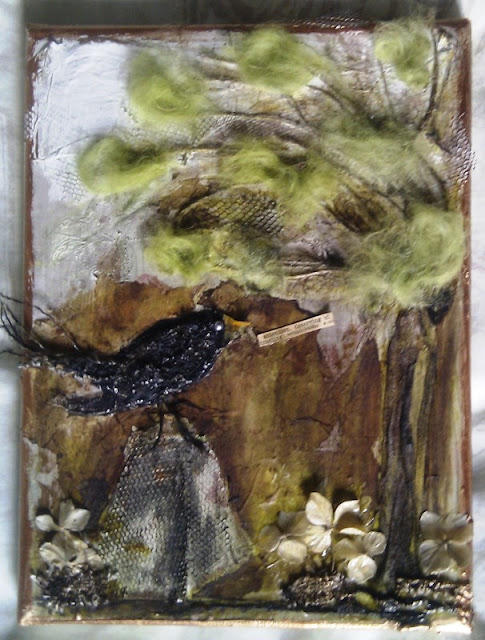 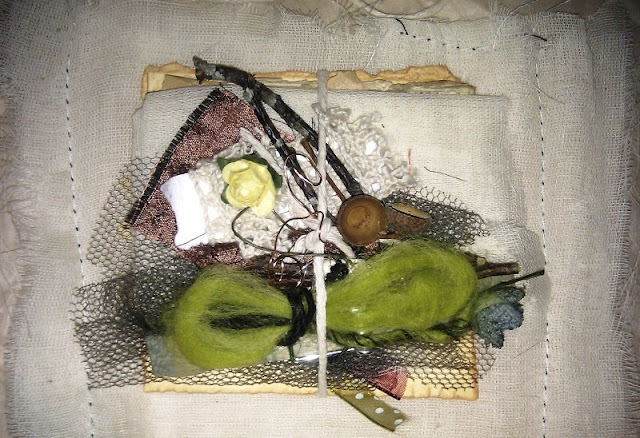 Next up is my Secret Santa swap from the Altered Gypsies group, and I received a fantastic package from the original Altered Gypsy - Kersten. Apart from a box full of ephemera and quirky rubber stamps, I also received this charm made from antler and home made beads.

Well, it worked. However I decided that it wasn't right for the swap, so went on to Plan E (which was a revised Plan C). Plan E worked and is now ready to be wrapped and posted. You'll have to wait for the details of that one, I don't want to spoil the surprise.

Anyway, back to Plan D. This started life as a copy of The Iliad. It's only small (7" x 4" and about ½" thick), and at some time in the past has been repaired by the local library and covered in clear plastic, so the first task was a coat or three of gesso.
After that it was covered with kitchen roll, applied with a diluted PVA glue/white acrylic mix and allowed to dry. Once dry it was painted with a layer of white acrylic and left to dry. Then another layer of kitchen roll, layer of acrylic, and so on. The kitchen roll crinkles and warps while it's wet and gives that lovely texture you can see. Also, the PVA/acrylic mix sets really well and should be quite robust. Once the final layer was dry I added the brass plaque and left it alone (managed not to overdo it for once). 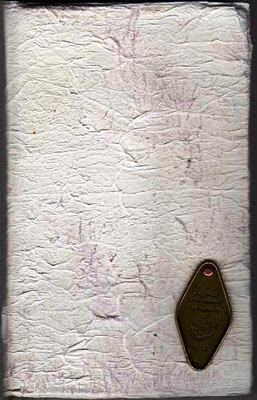 The signatures were put together using various papers; registration pages, manuscript, tracing paper, etc. These were then bound together, and sewn onto a strip of fabric. The whole thing was then glued into place and the fabric edges covered with more kitchen roll/PVA mix.
I'm not sure what I'll do with it, but it's small enough to carry around and work in when the muse strikes. 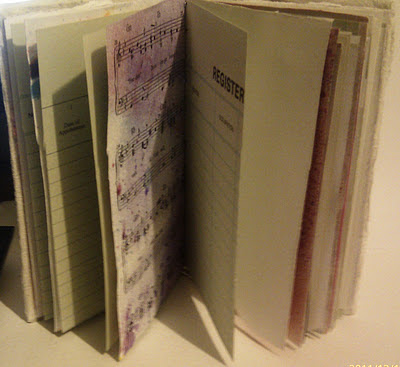 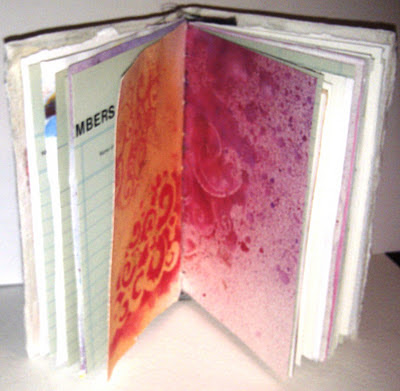 Plan C didn't make it past the idea stage 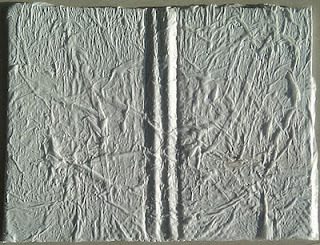 Hopefully I'll manage to get something worthwhile made before I run out of letters!
Posted by Nigel at 13:38 5 comments:

In the bleak Midwinter 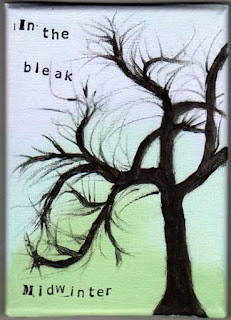 This is a 7x5 canvas, acrylic background with the tree added in poster paint and stamped lettering.
The original design (without the lettering) was going to be a swap, but as it only took about 1 hour (mostly watching the paint dry) it felt a bit too easy. I like it but it felt like I should put a bit more effort in for the swap. I was sitting listening to Classic FM, and considering whether to add the lettering and enter it for the latest Cubby Hole challenge, (A Christmas carol) when "In the bleak midwinter" came on.
Ok, I can take a hint. This is going to the Cubby Hole and I'll make something else for the swap.
Posted by Nigel at 22:47 9 comments:

If you thought I'd wandered off, never to be seen again; unlucky! I've just been busy and not had much internet time.

There has been creativity during the week; some good, some bad and some ugly...

First off, I can now show a couple of the Christmas cards that I made during AEDM for the workshop that we held yesterday at the Cubby Hole. That Woman showed us ideas for gift boxes, Carol showed us a handmade tree decoration, and I had 3 cards. It's always intriguing to see the variations that people come up with (the steampunk versions were very different). 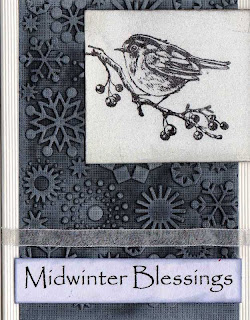 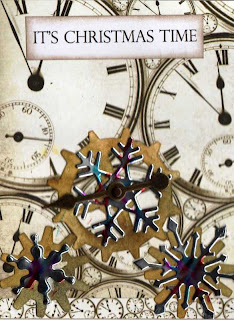 Next up are a couple of gifts for friends. They're known as care boxes, and can be made from anything that you can wrap in a sheet of paper (one was throat lozenges, the other antacids). 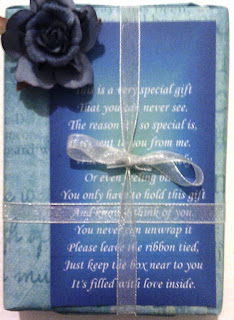 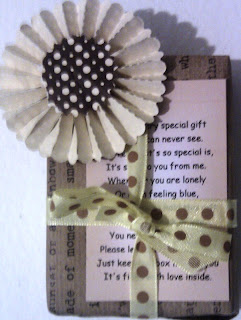 That's the good stuff sorted. The bad was a couple of ideas which I've had and are great in my head, but just can't get them onto paper or canvas. not even a basic sketch. They've been filed for later in the month (or next year).

Now for the ugly. This is was a canvas for somebody. It started out light brown and green with some botanical stamping. Then it turned green, pink, gesso, back to green and is now in the condition you see before you. Mixed up in all that chameleon whirl is tissue, mesh (tulle) and gauze. It's now gone into the 'I'll come back to that later' pile, and I've started a fresh canvas for the swap. 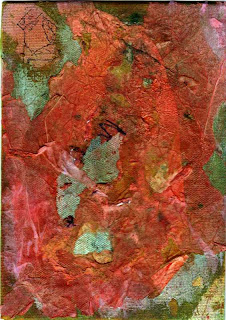 This is another Christmas present, this time for one of the ladies at the meditation/Reiki group (I haven't decided which one yet, I may leave them unlabelled and see who gets what).

The poem is Leisure by WH Davies.

There should be another 3 canvases on similar themes over the next few days, watch this space.

It's also another entry for CED

The fairy image is from Stampotique / Jo Capper-Sandon, 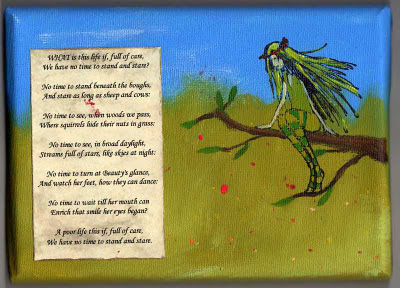 This isn't a new piece. It was created a while back for the last Cubby Hole challenge, so I've been keeping it on hold until it had gone on the Cubby Hole Blog.
AEDM may be finished, but I've signed up to CED and I'm hoping to keep going with something most days. Last night was some basic prep work on canvas and tags, so nothing to show at the moment. Providing my current flare-up goes away I'll get something finished tonight.