First off, many thanks to all those who sent wishes, prayers, etc whilst I was away.*

I'm back now and recovering well, and getting back into the swing of creating
(and hopefully back to regular blogging).

For the first 24 hours after surgery I was doped up to the eyeballs on morphine
to keep me quiet.
Needless to say, for the next couple of days I had some very interesting experiences
until it had cleared out of my system.

My hospital room was wonderfully decorated with frescoed walls
and a vaulted Grecian ceiling to rival the Sistine Chapel.
There were amazing pieces of artwork in a wide variety of styles;
Old Masters, Pre-Raphaelite, even a Banksy.

Unsurprisingly, after a while I realised it was beige walls,
poly ceiling tiles and photoprints in plastic frames.
Oh well, it was good while it was lasted.

I also had some amazing ideas for artwork,
but forgot them by time I was capable of making any kind of note.
Except this one.
This one stuck in my head.
Probably because I can actually make sense of what (and who) it signifies. 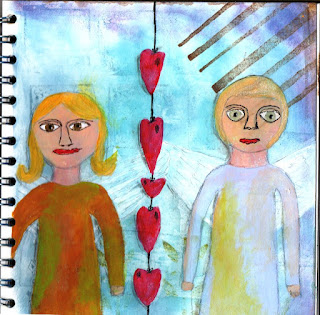 I just wish the figures hadn't appeared in that
round faced, slightly vacant, simplistic style
that seems to be so popular
(and which I don't really like).
But the aim was to paint what I saw,
so I've had to stick with it.

In a way I can see now why painters, writers and other creative types
became hooked on opiates.
The visions were fascinating, and amazingly detailed and vibrant.
All I had to do was close my eyes
and my sub-conscious would paint the most beautiful and meaningful images
right there in front of me.
I could have done without the nausea, shivers, creepy skin, etc. though.

*For those who don't have the misfortune of being on my FB/twitter feed, I've been absent due to surgery.
Posted by Nigel at 19:29 4 comments: