Birthday card for a friend 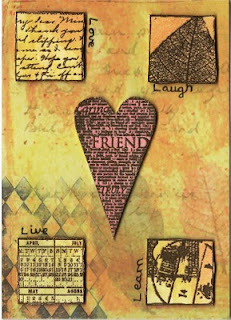 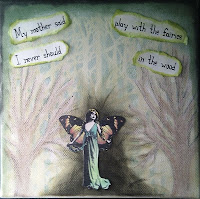 This is my entry for the May swap at the Cubby Hole. The words are from a Terry Pratchett story, but originate in a traditional child's skipping song

My mother said I never should

Play with the fairies in the wood

If I did, she would say

You naughty girl to disobey

You naughty little girl, you shan't be mine!

Inspired by the latest swap over at the Cubby Hole, is this little bit of silliness for my youngest. 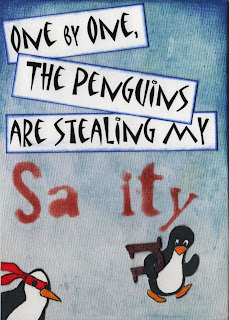 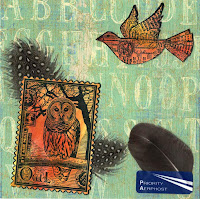 Liisa is about to lose her favourite post office, and she's put out a request for Mailart for the lady who runs it.

Here's my contribution.
Posted by Nigel at 17:23 No comments: 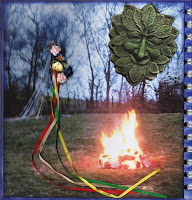 This is the Beltaine page in my "Year in the life" journal. For those who don't follow a pagan path, I've added a brief description of the festivities. The background image is the Bel fire and maypole from this weekend.
Friday. Leave at 9am, arrive Scotland 8pm. Sit down to a meal of home made goodies, then wander down to the bottom of the garden and sit around a small fire with wine, next to the stream and catch up with everybody's going's on.

Saturday. Rolling breakfast in the kitchen as people wander in and out, then most folks head out to St Andrews for the day. Those of us who remain dig the fire-pit, chop wood and erect the maypole. When the others return, garlands are made, the green man is dressed and then there's more socialising before wandering to bed.

Sunday. Woken up to the delicate(!) strains of Jethro Tull's "Beltaine" being played at full belt, followed by Chrissie Hynd's "Hymn to her" and other suitable songs. Stagger out of the van and realise it's still dark. Everybody gathers in the house and is given a quick run through of the celebration, as well as picking principal characters, then it's out into the pre-dawn light.
We separate into two sides, winter & summer, and take up opposing positions. The Winter Queen proclaims her reign, the Summer Queen challenges her and battle commences. Summer wins and power is handed over for the next 6 months. The Summer Queen lights the Bel fire and then leads everybody in a spiral dance to the maypole, where we dance in the May.
At this point the Green Man appears and chases the women, who try to avoid his touch while trying to pinch a little of his greenery. Eventually he falls exhausted and the ladies head off to the small fire in the garden and after rescuing the Green Man from his costume the men join them for the passing of the Beltaine cup (Hawthorn wine this year).
By now the Bel fire is burning nicely and the men take it in turns to leap the fire, as do most of the ladies. Once everybody has finished, some daft brave souls head off to the beach for an early morning dip, some head back to bed and the rest congregate in the kitchen for another ongoing breakfast.
The rest of the day is spent relaxing with some folks drifting off home at various points in the day. At some stage in the day the two sheep receive their annual shearing, with a couple of us catching and holding them while our hosts shear them.
After the evening meal and a dip in the hot tub, it's usually an earlyish night, ready for the drive home.

Monday. Up early and a last breakfast, followed by the drive home - although this year I detoured via Whitby for a day or two.

It's a fantastic weekend, full of friendship and totally stress free. 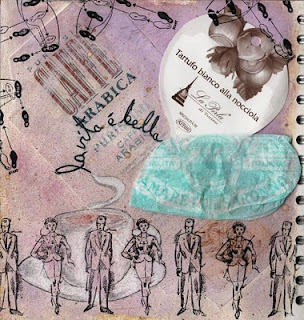 Another art journal page that has been waiting completion.

Thanks to Athena for coffee and nibbles, inspiration and spelling :)
Posted by Nigel at 16:48 2 comments: 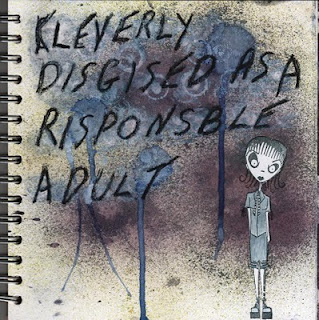 I'm back from Scotland (more of that in a later post).

This is a page in my art journal that's been sitting and waiting for the stamp to arrive at the Cubby Hole. The image is Stampotique "Two Barrettes".