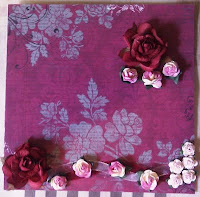 Nothing to do with the words from Jim Morrison's 'L.A. Woman', but simply the fact that I've managed to make something - two somethings in fact.
Before you know it I'll be in full flow and posting every day (don't hold your breath waiting).

First up is an RSVP card. I was asked to make this by a friend at work who has been invited to a wedding. She wanted something 'pink & flouncy' so I hope this fits the bill. If not it may be appearing as a Valentine card in a few months time, and I'll try and come up with something else.

The second one is a journal page. There's currently a round robin going on at the Altered Gypsies, with the theme of 'The Wheel of the Year'. Instead of posting whole books across the pond, we're just sending the pages and then assembling the book when we reach the end. This is my first Lammas page (which should have been done for August 1st). I need to finish the other Lammas page and then they can go in the post, probably at the same time as the Equinox pages at the rate things are going.
Posted by Nigel at 22:53 4 comments:

I've just had a cull of my blog list, and taken out all the ones which haven't been updated for months.

Rather than picking them out one by one, I decided to do a mass delete and then add things back in. Which was a brilliant strategy in theory....

Unfortunately, it means I've lost all those who use Wordpress and some of the Blogger ones, so now have less than intended. I've added some back in manually, but if your blog has disappeared off the side bar, it's nothing personal - just throw something at me to get my attention and I'll add you back in.

Before I get into the main post, apologies to those whose blogs I've neglected, and who I owe an email or post, Life™ has been a bit hectic. I've been away at another camp which was a real bonus, very chilled and recharged as a result, plus there's been lots of family stuff going on. Hopefully life™ will shortly return to normal and I'll get back to some regular crafting/blogging (famous last words). 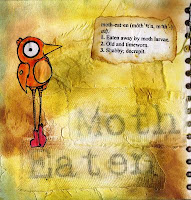 Anyway, back to the real reason for this post.

Following my last post, I received a comment from Joanna/Asia asking if she could have a page as well, so in a moment of madness I asked her what she'd like and the reply was:

After racking my brains, I was looking at the long legged birds from the Octopode Factory, and thought "they look a bit moth eaten". Ta-da - I have an idea, so I present to you "Moth Eaten" - especially for Joanna.

Now, anybody else got any weird ideas, or can I get back to my normal* crafting? 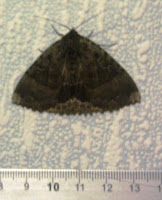 Also, when I was creating this page, I had a visit from this wonderful creature, and yes it really was 5cm across (2" in old money). 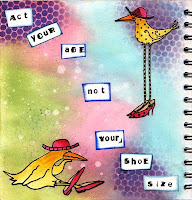 .....because apparently she likes to see what random quotes I come up with.

This was made last weekend and this is the first real chance to post it up.

Now to go and finish some birthday cards for the weekend.
Posted by Nigel at 21:51 6 comments: 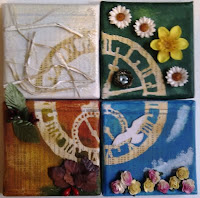 For those who were wondering if I'd finally disappeared into the land of blog limbo, I have bad news - you don't get rid of me that easily!
For those who I owe an email or goodies, I haven't forgotten and they'll turn up eventually.


It's been a hectic couple of weeks, but I have been able to create - I just couldn't blog anything as you'll see further on. There's still some hospital trips, shopping and so on, but things are settling down now.

Last weekend I was away to Exmoor for a gathering, and it was good to chill out with friends, and recharge my batteries ready for this week's mayhem and late nights getting ready for Friday night, which saw the preview of the Great Cubby Hole Exhibition entitled "Celebrating the Diversity", featuring works from some very talented people who are part of the community at the Cubby Hole.


The exhibits were fantastic, and covered a huge range of styles including painting, assemblage, rugwork, stitching and much more. 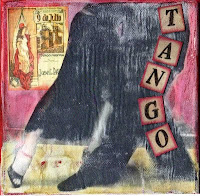 I entered 6 pieces, 3 of which were new and 3 which I've blogged previously. The centre piece of the exhibition was a collaborative work entitled Summer, which we somehow managed to arrange in a cohesive manner that looked brilliant. I also produced a set of 4x4 canvases for sale, with proceeds going to MacMillan.


The preview went well, with many people coming to view works, and many of the exhibitors turning up in fancy dress (scroll down to the bottom if you want a laugh). Some pieces were

sold on the night including two of mine (Bird on a wire and 4 seasons). Four of the mini-canvases went too, and the others are still available.


I've not included anybody else's work, as it will be appearing on the Cubby Hole Blog soon, but you may want to keep an eye on the blogs of Sue Roddis, Suzi B, Papillon and 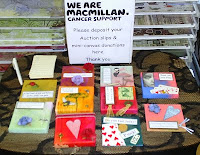 That Woman for more about the night.


Pics are (from top to bottom):

Bird on a wire, Head & Heart

Scavengers of the council tip 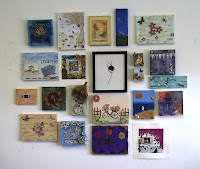 Yours truly and Cubby Hole Carol