Now there's a catchy title!
As I mentioned in my last blog entry of 2009, one of the projects at the Cubby Hole this year is to keep a journal entitled "A Year in the Life of...". I must admit that I thought it would be a slow start, as January isn't exactly well known for it's festivals or celebrations, there's no birthdays or anything much coming up, so figured it would be a while before I made any real progress. Wrong! We're 9 days into the year and I've got my first two pages completed. 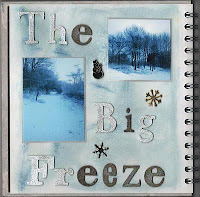 Unless you are living in some far-flung exotic place (like Mars) you've probably heard rumours that Britain is having a winter this year. Not the usual grey, damp and miserable period between autumn and spring, but a real one with snow and cold temperatures. As usual the media has gone into overdrive with much wailing and gnashing of teeth, started calling it "The Big Freeze" and predicting the end of civilisation as we know it. The rest of us are just getting on with it the best we can and even enjoying the experience. I took the pictures on walk to work last week (when I actually worked - see below). The path is around the edge of the business park where our offices are located, and a very pleasant walk it is too. 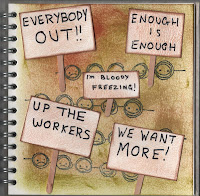 The second page is inspired by the fact that we're in dispute with our employer over various issues (which I'm not going to bore you with the details about), and as a result we've been on strike since Thursday and not returning until Tuesday. Unfortunately I've not been able to join the picket line yet (hopefully on Monday) due to illness, but I'm reliably informed that spirits were high amongst the various "Michelin Man" lookalikes gathered outside the offices in sub-zero temperatures. Unfortunately the burning oil drum brazier associated with the strikes of the 80's and 90's is now banned due to Health & Safety.
Posted by Nigel at 20:04