Christmas production has started in earnest

Today was a Christmas card workshop at the Cubby Hole, with Sarah Anderson.

After an hour spent gossiping, we eventually started at 11. Sarah provided some sample cards for inspiration, and then left us to get on with it. in our own styles, and just prompting and helping where needed. From then on we sprayed and inked and stamped (and ate cake), and I eventually left with eight cards and a decorated peg.

Production was suspended at one point as Carol received and opened a parcel of stamps from Stampotique, resulting in the sort of feeding frenzy normally seen on Discovery channel :) 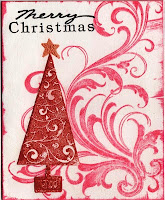 Whilst I was making cards, and using red inks, it seemed sensible to make one for this week's Play Date Cafe, where the theme is Red & White. In the end I made three :) 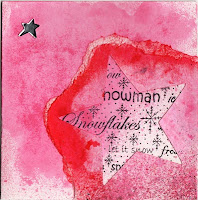